Painter Jessica Gonzales ’12 uses a bit of magic to design her murals.

“I have ideas that come to me in a dream, in my waking moments, in the seconds before I wake up in the morning,” she says.

When she had a commission for the Hotel McCoy, an independent Tucson hotel that makes a point of decorating with art, she couldn’t decide what she should paint. Then those dream moments gave her a vision.

She painted a beautifully colored image of a woman blowing bubbles and succulent desert plants floating in little terrariums. Like much of her work, the mural honors Tucson’s desert home. And the “poppy, psychedelic colors” she used pay homage to the McCoy’s origins in the swinging ’60s.

“I tried to do a little retro,” Gonzales says with a smile.

With her imaginative pictures, hot colors and desert vibes, Gonzales has become a star in Tucson’s mural explosion. Her works, often of women, are all over downtown and beyond.

It’s not hard to find her outdoors on a ladder, dressed in colorful vintage outfits, painting the side of buildings like Antigone Books, the Loft Cinema or the Rialto Theatre. Her enchanted fans love to watch her work.

“People want to come and chit-chat,” she laughs. “Obviously I want to engage with my audience, but sometimes I’ve got deadlines!”

She gives credit for her success to Tucson High School and the University of Arizona School of Art.

Gonzales had made art since she was a kid — she liked to draw her friends’ portraits on the bus ride to school — and she crossed town to study art at Tucson High magnet school. Those high school art classes were top-notch, but it was at UArizona that she embraced painting.

“My first semester, I took a class with Alfred Quiroz, and I loved it.” (Quiroz, a charismatic professor and successful artist, is now retired.) “I had some interest in painting but didn’t really have experience with it. The excitement of being at the university, in combination with Alfred and his personality, changed all that.” She majored in art and concentrated in painting.

After graduating in 2012, she easily moved into the downtown arts scene. She’s lived in Tucson since she was 12, and she already was a regular on arty Fourth Avenue. She worked at the Tucson Thrift Shop, vendor of vintage clothes, and she frequented the rave circuit. It was not long before she began doing paintings on commission and exhibiting her personal work at local venues.

The first time she painted in a public space was at a band’s release party. “They asked if I would just come up on the stage and paint on canvas during the show. After that, I started painting live at different events, music events and charity.”

She began painting outside on the patio at Mr. Head’s Art Gallery on Fourth Avenue. Working in collaboration with other artists, she made the leap to murals. As she puts it, “I went from painting canvas live to painting on walls — live.”

Her career really took off when she won a call to mural artists from the City of Tucson in 2016. Gonzales was one of eight artists to win a slot, and with the help of the city she got to make her first big solo mural.

It was located on Wig-O-Rama, the now-closed eccentric downtown wig shop. Settling on a theme of birth, nurturing and growth, she painted giant portraits of three Tucson women she knew. Their faces were ringed with ribbons and flowers in every color of the rainbow. Beyond them was an Arizona sunrise and raindrops in a purple sky.

The joyous work was “about how the downtown community helps support me as an artist. It was a thank you to the art community.”

The piece stood for only a year and a half before a new owner wanted to expose the building’s historic brick and the mural was destroyed. Gonzales took its demise in stride. “It’s part of the nature of public art. You know there’s a possibility of vandalizing or building up.”

But Gonzales was on her way. She won a second contest from the city, and she became the regular muralist for the Rialto, the popular downtown music venue. The Rialto works are short-term pieces that advertise upcoming acts. Gonzales has to work fast between shows, turning out two murals in three days.

“It’s a really fun challenge,” she says. “It taught me a lot about my design process, how to come up with something eye-catching for people driving by, something different each time. It’s another way for me to grow as an artist.”

Then, in March 2020, the pandemic hit. The Rialto shut down, and that gig went on hiatus.

“When quarantine first started, I definitely had a moment when I was concerned,” she remembers. Before long, though, she picked up new commissions. Creative Machines, a design and fabrication firm on the south side of town, hired her to paint massive murals on its headquarters. And then the Loft Cinema invited her to dream up a painting for a big wall on its movie house. Gonzales obliged with a giant head of a blue-faced woman, gazing up at the silver screen.

Unfortunately, one important project that was, like her Rialto work, put on a pandemic pause was her first commission from the University of Arizona. The university had lined up Gonzales and her fiance, Dakan Martin, who often works with her, to make a giant portable canvas at the South by Southwest festival in Austin, Texas. The piece was to promote the university.

“We got as far as painting half of it,” Gonzales says wistfully. “It references the desert, plant life, cactus, ‘A’ Mountain. We were really excited about it.” She’s hoping that it will happen next year. “Any opportunity to do a mural for the UA in whatever capacity — that would be awesome.”

Meantime, her work is getting better and better.

In early 2021, the town of Sahuarita hired her to do her most ambitious mural yet: a large-scale, three-dimensional installation made from recycled street signs. A marvelous “puzzle mural” in a neighborhood park, it has multiple layers and even a small stand where visitors can see every sign at once.

“It was really different, out of my wheelhouse,” she says. “I can’t tell you how many challenges I encountered.”

Even so, working as a full-time artist “really is a dream come true,” she says. “It’s amazing how things have worked out.” 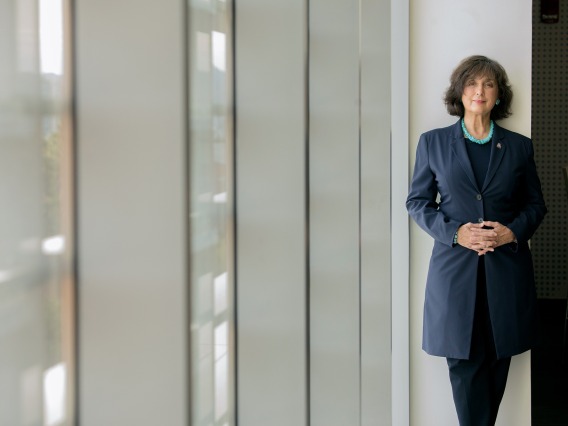 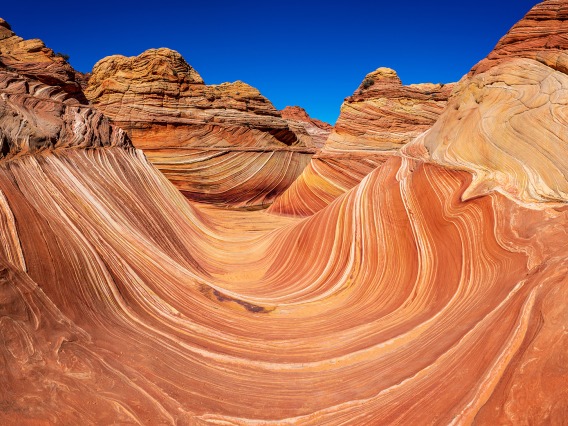 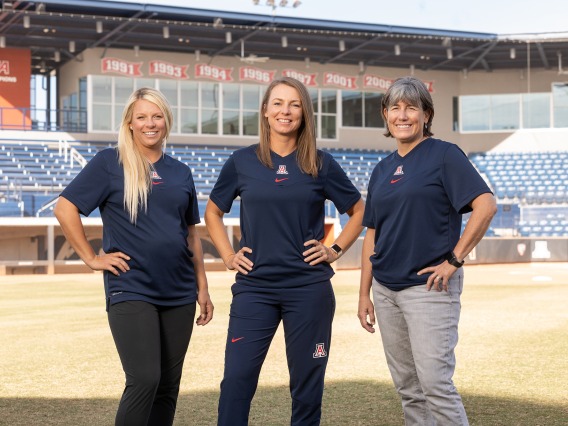