‘Arbiters of Our Destiny’

‘Every society needs educated people, but the primary responsibility of educated people is to bring wisdom back into the community and make it available to others so that the lives they are leading make sense.’

Just east of Pascua Yaqui land, in what was once Hohokam Middle School, there is a decorative partition symbolic not of division but of hope. Designed by Yaqui architect Selina Martinez, the silver metallic installation — suspended from the ceiling mere feet inside a classroom — features large floral cutouts providing glimpses of the space within.

For those who arrive at the threshold of this remade room, the artistic feature signals entrance into the Sewa Ania, or ‘Flower World,’ a zone of replenishment in the Yaqui faith. It is, as such, a marker of both space and time, a turning from a difficult there and then to a brighter here and now.

Hohokam Middle School turned out its lights in 2013, due to low enrollment and struggling students. That was then. Now, in its place, the building offers fresh hope for the future: a microcampus, an extension of the University of Arizona, built to serve a tribe whose sovereignty was recognized just 44 years ago, in a city that sits on its own and others’ ancestral lands.

“The Yaquis believe that there are different worlds that we operate through and within,” says Serina Preciado, Pascua Yaqui director of education, a leader in the microcampus effort. “One of those is the Sewa Ania, sewa meaning ‘flower’ and ania meaning ‘world.’ And part of what that world represents is rebirth and renewal.

“The idea is that when we have been given agency over the resources around us, we know how to repurpose those spaces and utilize them in the ways that serve us best.”

Preciado says the microcampus is a place where Pascua Yaqui students — some of them formerly students of Hohokam Middle School — “can get a second opportunity” that honors the past yet is grounded in the present.

In 2021, UArizona and the Pascua Yaqui Tribe formed an intergovernmental agreement, or IGA, that affirmed the land-grant university’s commitment to serving the tribe. The IGA built on the campuswide land acknowledgment finalized a month before; both followed UArizona’s hiring of Levi Esquerra as senior vice president for Native American advancement and tribal engagement in 2020.

The microcampus is the first major breakthrough to come out of the IGA — a welcome milestone, since at times it seemed that the agreement, negotiated in the midst of the financial uncertainties of the coronavirus pandemic, would not come to fruition.

“Truth be told, December of 2020, I think both parties were going to wash their hands and walk away from it,” Esquerra says. “There were some things that you had to work through, right? I remember talking with UArizona Regents Professor Robert A. Williams Jr., and we said, ‘Hey, we’ve got to give it one more shot.’”

“The IGA is aspirational,” Preciado adds. “These are the things we want to see happen, but there’s no detailed list of who and how and when. Teacher and public-health education, sustainability, cybersecurity, those areas that we need to develop for our nation, for our tribe — the microcampus serves as the point of delivery for all the other projects coming up the pipeline.”

For Williams, an enrolled member of the Lumbee Tribe of North Carolina, the microcampus also signifies hard-won movement toward what he calls “real self-determination for Indian people.”

His words echo a quotation posted in bold letters in the microcampus classroom: “Every society needs educated people, but the primary responsibility of educated people is to bring wisdom back into the community and make it available to others so that the lives they are leading make sense.”

The quotation comes from the late activist and legal scholar Vine Deloria Jr. In 1982, Deloria founded the country’s first master’s program in American Indian studies at UArizona. Alongside Williams and former Regents Professor James Anaya, he also created the Indigenous Peoples Law and Policy program at the university’s James E. Rogers College of Law. Deloria died in 2005 after a 35-year teaching career at institutions across the American West.

Today, Williams remains a faculty member at UArizona, having previously served as chief justice of the Pascua Yaqui Court of Appeals.

He also is the author of four books, including “The American Indian in Western Legal Thought,” winner of the 1990 Outstanding Book Award from the Gustavus Myers Center for the Study of Bigotry and Human Rights.

When the microcampus opened to about 40 students for its inaugural seven-week term in December, Williams did the teaching, offering a course on comparative Indigenous rights.

Preciado estimates that 60 Pascua Yaqui students currently study on the UArizona main campus. Now, the microcampus will permit members of the tribe to receive higher education nearer to home, in the company of classmates whose experiences closely align with their own. The space includes the main classroom, which seats up to 50 students; two adjoining conference rooms for group or private study; and a computer lab with eight stations, a printer and access to the UArizona Wi-Fi network.

“The great thing about the microcampus is the U of A has invested in all the latest classroom technology,” Williams says. “It really is the classroom of the future. We can run courses on D2L, our online courses. We can do simulcast courses. It gives us a lot of flexibility to meet tribal needs, and particularly to tailor our programs to the community itself.”

The microcampus is the first established by the university in service to one of the state’s 22 federally recognized Indigenous tribes. Williams says it also is likely the first such microcampus created globally by a so-called “R1” university, an institution with very high research activity. Esquerra’s office has plans for more such campuses throughout Arizona and then beyond — making the Pascua Yaqui campus the first strands woven into what could become an expansive tapestry.

Says Williams, “We’re forming relationships with Indigenous-serving institutions in Africa, in Asia, in South America, and these would all be under the umbrella of a school of Indigenous governance and development, an online virtual university focused on the needs of Native nations and Indigenous peoples around the world.”

Esquerra is ready for the challenge. “If we’re going to be that leading institution serving tribal nations, then we have to step up to it.” He says that there has recently been interest in a microcampus from Hopi Tribe Chair Timothy Nuvangyaoma.

But microcampuses are not the only way that UArizona is promoting higher-ed access for Indigenous students. The Arizona Native Scholars (ANS) Grant, announced in June after the creation of a kindred program by the University of California system, will fill in all gaps in tuition, mandatory fees, tuition differentials and program fees for main-campus Native undergraduates who are Arizona residents and enrolled and verified members of federally recognized Arizona tribes.

ANS funding is added after other federal and institutional financial aid, such as the Pell Grant and merit scholarships, says Kasey Urquídez, UArizona vice president of enrollment management and dean of undergraduate admissions. This ensures that, after those modes of funding have been applied, students will receive the additional aid via ANS to make college possible.

Students can access ANS funding for up to eight semesters, and aid received through their home tribe does not count against the amount available to them through ANS. Urquídez says that this distinguishes UArizona’s program from others like it.

“Everything that we do is really with our commitment to help students be retained and graduate,” Urquídez says. “To have the ability to do their coursework and be involved without that financial strain that they may have had prior to this award being out there, and [to] be able to persist and graduate — that’s our No. 1 goal.”

Cherokee Hanks, raised in the Navajo Nation near Cedar Ridge, Arizona — a rural area about 40 miles south of Page — is a first-year student receiving support through ANS. Drawing inspiration and belief from her father, who holds a master’s degree in public administration from Grand Canyon University, she intends to earn a bachelor’s in nursing and then, perhaps, work in hospitals on the reservation.

Hanks’ family struggled with basic needs during her youth, including access to both water and, having no electricity at home, heat.

Now, homesick in Tucson, she phones her parents and half-siblings every day and spends time with UArizona junior Ashlyn Adakai, who also grew up in the Navajo Nation. Adakai attended high school in Page with Hanks, where together they played basketball and ran cross country.

“I want to be the best version of myself,” Hanks says. “I want to make my people proud — the Navajo people proud. And I just want to become a really good role model for other Native Americans.

“And I just want to be happy — explore new things, travel, try new stuff, too. And just live life.”

Each of these milestones — the microcampus, the grant program — offers a step toward self-determination, the possibility of following one’s path as far as possible. Preciado said in October, “We are the arbiters of our truth, of our own destiny.” She was speaking of Pascua Yaqui, but her words would seem to carry a more blanketing truth.

“That changed my trajectory and my life — the opportunities I have, not only for myself but my family.”

Today more than ever, students like Hanks, Adakai and those at the Pascua Yaqui microcampus can say the same.

“Access is one of the cornerstones of control for marginalized communities, right? What do we have access to, and how are we able to use the resources around us to be self-determined?” Preciado says.

“As Native people operating under a sovereign system, we need to be able to develop independent systems that come from our ways of knowing for us to be able to rectify the legacy of marginalization against Native peoples within the country.” 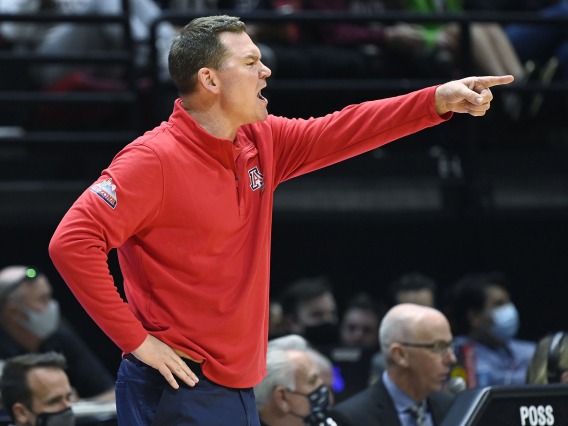 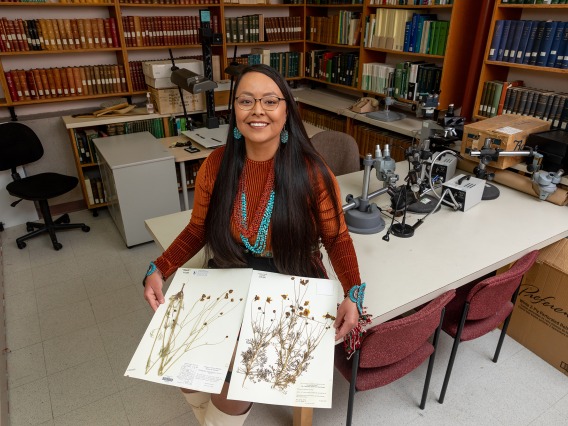 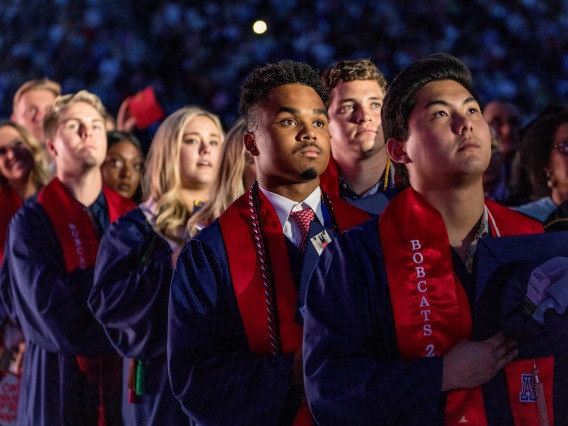